Shipping machinery and oversize loads in New Jersey is hassle-free with the Heavy Equipment Team on your side. All of our heavy machinery shipping services are coordinated by experienced professionals, with local knowledge of New Jersey's quickest and safest transport routes. Your equipment transport will be taken care of, from start to finish. We provide all-inclusive equipment and oversize load shipping throughout all of New Jersey.

Shipping heavy equipment in New Jersey is our specialty. Transport is offered as one easy-to-track service that incorporates seamless door-to-door transportation, loading, and offloading assistance, securing, tracking, and moving heavy machinery of all types. Our fleet can handle oversized heavy machinery weighing 150,000lbs or more, as well as equipment extending up to 50ft. We can help you with moving heavy machinery from all major manufacturers, including Komatsu, Hitachi, Kobelco, Takeuchi, and Oshkosh. Heavy Equipment Transport provides quality solutions to ship equipment in New Jersey. Get your quote today! (888) 730-2951

Sam Duncan coordinated the transportation of this 44L 12W 13.8H and 58000lbs screen plant through our power only shipping services. He processed transport documents and contacted one of our professional drivers near the pick up location who delivered the screen plant safely and on time. For affordable and reliable power only shipping services, call us now! 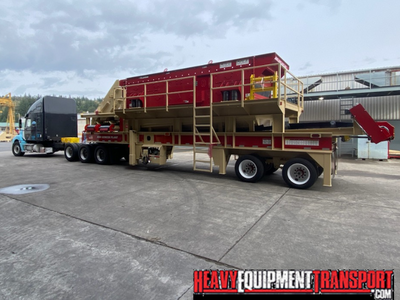 Our Heavy Equipment Transport is the best company to ship semi trucks to or from New Jersey. We have operated in the Garden State for over a decade, and the locals know us well. We have a statewide semi truck shipping network that's proud to serve the residents of New Jersey, no matter where you are. Large cities like Newark, Jersey City, Paterson, and Elizabeth benefit from excellent coverage by our semi truck drivers, but that's not all. We also serve even the most rural locations! Heavy Equipment Transport provides New Jersey semi truck transport at the most affordable rates.

I-78 is a major east-west route that stretches from Lebanon County in Pennsylvania to New York City. It enters New Jersey via the I-78 toll bridge over the Delaware River and heads east into Phillipsburg. From here, the route runs to the south through agricultural areas of Pohatcong Township, bypassing the center of Alpha and crossing under central New Jersey's Lehigh Line railroad. Later, the route crosses the Lamington River and continues east through Somerset County, mostly through woods and farmland, though it does connect to suburban residential areas such as Bedminster.

I-80 enters Hardwick, Warren County, from Pennsylvania on a crossing over the Delaware River and runs for approximately 68 miles before terminating at an I-95 junction. Traveling parallel to U.S. 46, this major highway connects the rural areas of Warren and Sussex counties to suburban Morris County. The road continues to urban destinations in Passaic and Bergen counties, terminating in Teaneck Township.

I-95 is a major highway that connects nearly the East Coast's full extent, from Florida to Maine. The road first enters the state at a crossing of the Delaware River in Burlington, following the same route as the Pearl Harbor Memorial Extension, traveling east into N.J. through the rural areas of Florence before crossing into the Mansfield Township and merging with exit 6 of the New Jersey Turnpike. I-95 continues in a northeasterly direction following the New Jersey Turnpike route until exit 18, where it crosses the George Washington Bridge in Fort Lee and enters New York.