Ship your equipment, machinery, trucks, rv's and any load througout Illinois with us

Shipping a heavy machine in Illinois often requires a tailored heavy machinery delivery service. Transporting heavy machinery is not something that everyone can do safely, but we can. Our expert agents are experienced in Illinois equipment shipping regulations and laws. Our extensive fleet of carriers is at your service: from flatbeds to extended RGNs and drop trailers. We’ve got the best trailer to ship your equipment in Illinois.

Heavy Equipment Transport spends a lot of time traveling along Illinois highways, providing heavy machinery shipping services throughout the state and beyond. Whether you need us to transport a heavy machine across the Illinois state line, or ship heavy equipment to a new construction site in downtown Chicago, we have lots of experience navigating Illinois' busiest highways. We're a Heavy Equipment Transport company that takes pride in prompt heavy machinery delivery, utilizing the safest, quickest routes to your Indiana shipping destination. When shipping heavy equipment, we make sure that we plan the best available route that's not only cost-effective but capable of handling oversized, over-dimensional heavy machinery transport. Ship your equipment to Illinois today!

With the great help of Stephen Ladd, one of our farm equipment transport specialist, this 36L (29 Well) x 11.7W x 12H and 31000lbs Bunning 350 mk manure spreader was transported from Melrose Park, IL to MADERA, CA safely. A lowboy trailer was used because it's weight and size capacity was enough to accomodate the large farm equipment. To transport a Bunning 350 mk manure spreader, call us now! 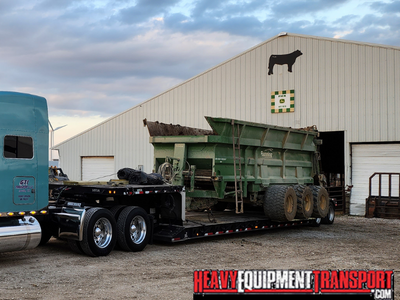 At Heavy Equipment Transport we provide custom Illinois shipping solutions that are tailored to fit your needs. Not every semi truck shipment is the same, so we make sure to listen to your needs and apply what works best for you. Your dedicated logistics agent will be available from the first call to final delivery. We answer any and all questions, making sure your Illinois semi truck shipping experience is transparent and done with quality service. Call now for an Illinois semi truck transport quote. (888) 730-2951

As semi truck movers in Illinois, our crews will often utilize some of Illinois' busiest highways, such as:


The I-90 runs northwest-southeast across the northern part of Illinois from its entry at the Wisconsin state line near South Beloit. From here, the road veers south to Rockford, before continuing on its journey to the southeast to the state line at Chicago. For its relatively short 108-mile stretch, the route encompasses a variety of environments to drive through, from the farmland that lies west of the Fox River Valley to the heart of industrial Chicago.

TThe I-55 is a major north-south route that connects St. Louis in Missouri to the Chicago metropolitan area. It enters the state via the Poplar Street Bridge near the east of St. Louis and runs on until it meets Lake Shore Drive near downtown Chicago. Along its route, the highway runs through Springfield, Bloomington, and Joliet. The I-55 often has heavy traffic, with more than 20,000 vehicles per day running along its length, especially as it passes through the Springfield metro, Bloomington-Normal metro, and Chicagoland metro areas.

The I-57 route parallels the old Illinois Central railways line and runs from Missouri to the I-55 exit in Chicago. It essentially serves as a shortcut route for semi truck delivery drivers heading from the south up to Chicago as it bypasses the busy St. Louis area.