Your most reliable choice for shipping equipment throughout Connecticut is Heavy Equipment Transport. For over a decade, we’ve provided residents of Connecticut with the best shipping solutions for oversize machinery. A dedicated agent will walk you through every step of the shipping process, so you know exactly what to expect from dispatch to delivery.

Common Equipment We Transport In Connecticut

Jackson Weeks was contacted by a client to help them transport a 24L 8.5W 10H 1997 Finn 120 hydro seeder from Danbury, CT to Smithville, MO. He processed the paperwork and decided a hotshot trailer would fit best for this shipment. On the day of transport, the equipment was safely loaded using a crane, well secured, and eventually delivered on time. To transport a 1997 Finn 120 hydro seeder, call us today! 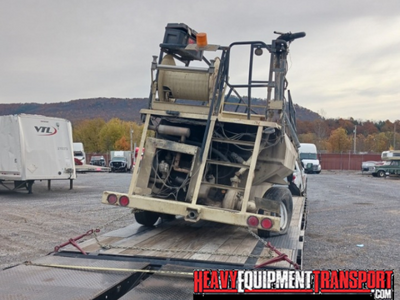 Connecticut is also known as the Constitution State, the Nutmeg State, and the Provisions State. Heavy Equipment Transport has over a decade of quality experience shipping semi trucks to and from Connecticut. A dedicated logistics agent will guide you through every step of the process. They’ll also be available to answer any questions you may have about your load. Get your Connecticut semi truck transport rate today! (888) 730-2951

When it comes to semi truck moving in Connecticut, our Heavy Equipment Transport drivers often use the following routes:

I-84, an east-west highway that connects Danbury to Waterbury, Hartford, and Union. Climbing away from Danbury, the road turns north and descends to a crossing on the Housatonic River. It travels through hilly terrain into Middlebury then Waterbury and follows a northeasterly route into Plainville. Through Farmington, West Hartford, and Hartford, there are many sharp curves along the way. From Hartford to Manchester and beyond, the road climbs up from the river valley, passing through Tolland County towns before traveling onward to Union.

I-91 is the most used north-south transport corridor through the center of Connecticut. It connects the state's largest cities of New Haven and Hartford. From east of downtown New Haven, the I-91 follows a north-eastward trend into North Haven. It then travels through eastern Wallingford before heading into eastern Meriden. Leaving Meriden, the road passes into the western edge of Middletown before it hits Cromwell. From there, the road enters Hartford County, Wethersfield, and Hartford City, before going to East Windsor, Enfield, and crossing the Massachusetts state line.

I-95, which is a major north-south highway on the East Coast that runs for approximately 111 miles in an east-to-west direction. It travels from the New York state line eastward to Greenwich and East Lyme as part of the Connecticut Turnpike, which passes major cities: Stamford, New Haven, and Bridgeport.