Heavy Equipment Transport is Nevada’s go-to oversize load shipping company. Shipping heavy machinery safely requires not only knowledge of Nevada's most accessible transportation routes, but there are many rules and regulations associated with heavy machinery delivery that need to be met. Our experienced logistics agent ship equipment to and from Nevada with top quality standards. At Heavy Equipment Transport, we've honed our machinery shipping service to provide the best services available.

We handle the permits associated with oversized equipment transport, as well as coordinate the paperwork required for customs checks, weighing stations, and international shipping. Our drivers regularly travel on Nevada's major highways, and we know the most efficient transport routes. We can take care of any Nevada equipment transport request, whether it's a construction equipment, compactor, excavator, or heavy-duty tanker. Heavy Equipment Transport is the industry-leading Nevada shipping company. Get your quote now! (888) 730-2951 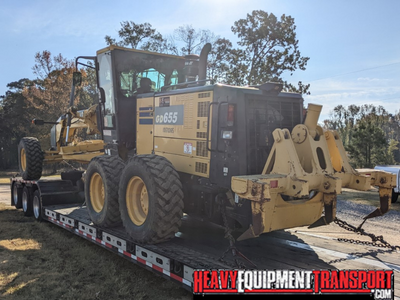 Our Nevada clients know that Heavy Equipment Transport is the best company to ship semi trucks, whether local or long distance. We transport new and used semi trucks to Nevada and the surrounding states. Heavy Equipment Transport is licensed, bonded, and insured, plus we have over a decade of experience shipping semi trucks to and from Nevada. We always keep up to date on the latest D.O.T. laws and updated safety standards, so you can be confident in our Nevada semi truck transport services.

A dedicated logistics agent will be with you from the first phone call to final delivery. Our drivers and loading crews know their way around semi trucks from all major manufacturers, including Freightliner, Peterbilt, and Volvo. Heavy Equipment Transport is the best Nevada semi truck transport company. All of our drivers are fully qualified, insured, and ready to transport semi trucks in Nebraska for you. Call for a Nebraska semi truck transport quote! (888) 730-2951

As semi truck transport professionals in Nevada, our drivers use several interstates to transport semi trucks, including:

I-15 begins in Primm, Clark County, continues through Las Vegas, and crosses the Arizona border in Mesquite. The highway only passes through one county in Nevada and is more commonly known as the Las Vegas Freeway. From Primm, the road travels north through the desert to Las Vegas urban area. At the Southern Beltway Interchange, the road provides access to McCarran International Airport and Henderson before traveling on the west side of the famous Las Vegas Strip towards downtown. The highway heads into North Las Vegas before leaving the urban area. From here, the road heads northeast, crossing the Muddy River, and climbing Mormon Mesa before entering Mesquite.

I-80 is a route that passes through northern Nevada. It servers the Reno-Sparks metro area and passes through several towns, including Fernley, Lovelock, Battle Mountain, Elko, Wells, and West Wendover. The road follows the historical Victory Highway, SR 1, and U.S. Route 40 along its journey through Nevada.

I-80 enters Nevada in the Truckee River Canyon, serving the metro areas of Verdi, Reno, and Sparks, also known as Truckee Meadows. Once leaving this area, the highway resumes its route alongside the Truckee River, moving away once it reaches Wadsworth. Past Wadsworth, the road cuts across the barren desert of the Lahontan Valley. For almost 400 km, I-80 then follows the Humboldt River route before joining the Feather River railroad route until it meets the Utah state line.