Kansas residents rely on Heavy Equipment Transport for equipment shipping. For over a decade we have provided the best oversize load transport services in the industry. We ship equipment to and from Kansas with quality service at affordable rates. Whether you need us to ship a heavy forklift or wheel loader in Oakley or transport a dump truck from Kansas City to an out-of-state destination, we're here to help.

We coordinate heavy machinery deliveries to and from every major city in Kansas. Our expert agents know all the Kansas oversize equipment shipping regulations, highways to use, and permits required for transport. We have access to a comprehensive fleet of specialized trailers suitable for heavy equipment towing such as RGNs, extended RGNs, step decks, and double-deck trailers. Get your transport rate and ship your equipment to Kansas today!

Andrew Raucci coordinated the transportation of this 22L x 11W x 12H and 51000lbs CAT D6 dozer from Derby, KS to Chiefland, FL. He chose an rgn trailer because it would accomodate the weight and size. Our team was careful when loading the equipment and used tarps to protect it from snow. We offer reliable and timely CAT D6 dozer shipping services. Call us today! 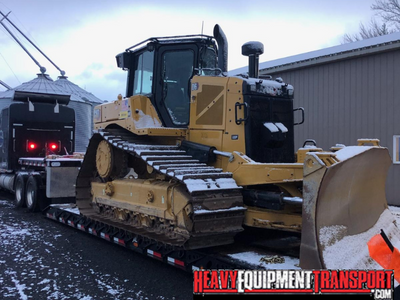 While Kansas is a busy trucking corridor for many state and interstate heavy equipment transport services, only two major interstates are serving the entire state. For anyone looking to coordinate bulky machinery delivery as part of a new project, it can be challenging to know the best times to travel these roads, or the quickest, safest side roads to take while towing heavy equipment. Fortunately, the Heavy Equipment Transport company is here to assist you with route planning, schedule coordination, and completion of the associated paperwork.

We're a reliable choice for towing heavy equipment throughout Kansas. We can deliver all types of equipment, from bulldozers to oversized water tanks. We don't just deliver heavy machinery, we provide suitable haulers, coordinate same-day loading, obtain oversized equipment delivery permits, and offer a myriad of other services. No matter what you need to deliver, our Kansas heavy machinery delivery service can be tailored to your specific needs. (888) 730-2951

KANSAS SEMI TRUCK TRANSPORT YOU CAN RELY ON

At Heavy Equipment Transport, we pride ourselves on hassle-free Kansas semi truck shipping service. Even at short notice, you can rely on our friendly, professional team to coordinate the entire Kansas semi truck shipping journey for you. Whether it's a short-distance transport across Wichita or a long-distance drive across the Kansas plains via I-70 interstate, our team can get your semi truck to its next destination. While we are proud to serve Kansas, we are also a nationwide semi truck transport company that can handle out-of-state shipping. We transport new and used semi trucks all across Kansas with top quality service.

Heavy Equipment Transport utilizes some of the busiest interstate routes for semi truck shipping in Kansas, including the following:


The 1-35 in Kansas travels from the border of Oklahoma to the Missouri border for a length of almost 380km. The highway passes through the state's largest city, Wichita, connecting it to Emporia, Ottawa, Kansas City, and Johnson County suburbs. Near its entrance to the state from the Oklahoma border, it passes through a toll plaza near the exit for South Haven. From here, the route passes Wellington, and the road continues north to Wichita.

After its journey around downtown Wichita, the road passes through the suburbs. Between here and El Dorado, the route intersects US-77 and many other highways before entering the Flint Hills region. Leaving Emporia, the interstate road meets the I-335 and passes through another toll plaza before continuing eastward through east-central Kansas. From Ottawa, the journey turns northeasterly until it meets the Kansas City metro and crosses the state line in Missouri.

The I-70 is another highway that travels extensively through Kansas. It starts at the Colorado border near Kanorado and exits at the Missouri border in Kansas City. The route passes through several principal cities, including Salina, Topeka, Lawrence, Junction City, Abilene, and Kansas City. Once it reaches Colby on its way from the Colorado border, the I-70 turns southeast towards Oakley. The course is generally flat until it reaches the Smoky Hills on the border between Russell and Ellsworth counties. Once it reaches Salina, the highway traverses the Flint Hills and enters Missouri through a main northern route.