Heavy Equipment Transport is your most reliable choice for shipping a wide range of construction, agricultural, and heavy-duty machinery throughout Oklahoma. We've honed our equipment and oversize load shipping service over years of trucking and streamlined how we deliver heavy machinery throughout the state. If you're looking to ship equipment through Oklahoma, Heavy Equipment Transport will do it right. We provide the best Oklahoma equipment shipping services at the best rates.

Three significant highways serve Oklahoma, with each one passing through Oklahoma City. Oklahoma City is an integral part of the U.S. interstate network and a transport hub that connects Kansas, Texas, Arkansas, and Missouri through the center of Oklahoma. At Heavy Equipment Transport, we coordinate heavy machinery shipping services that not only pass through Oklahoma City, but other major cities, including Tulsa, Norman, Broken Arrow, Lawton, and more. Whether you need us to ship an oversize load to a major city, remote location, or out-of-state, we’ll transport your freight safely and deliver on time. Get your Oklahoma equipment shipping rate now! (888) 730-2951

2018 CATERPILLAR 308 EXCAVATOR ON A STEPDECK TRAILER 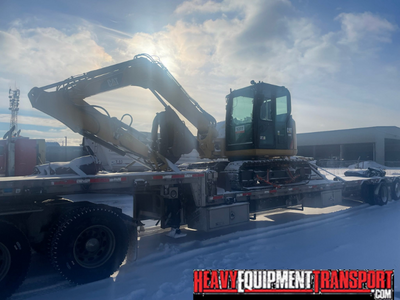 For over ten years, Heavy Equipment Transport has provided high-quality, safe, and timely semi truck shipping throughout the US, including Oklahoma. We have a high compliance policy with the state's DOT trucking laws and regulations to ensure that your tractor trailer transport travels within the state legally and seamlessly. That said, we'll retrieve the semi truck transport permit, which will allow us to get through police checkpoints undisturbed.

Efficiency is key when shipping a semi-truck and Heavy Equipment Transport has mastered the art of providing timely transport services. Our professionals will be at the pick-up point in time to ensure that the tractor trailer shipment gets to the delivery area without having to breach the state's travel time limits. Call now! (888) 730-2951

We are the best company to ship your semi truck in Oklahoma. We easily ship your tractor trailers on the major hauling routes in Oklahoma, including:

Extending from Thackerville, at the Texas state border, to Braman, near the northern state border, I-35 covers about 235 miles. It passes through important commercial centers like Ardmore, Norman, Oklahoma City, Seward, Perry and Blackwell. The route is especially busy with traffic as it approaches Oklahoma City from Norman and Moore, where thousands of people drive and commute to work in the city. I-40 runs east from western Fort Smith, Arkansas, to Erick, at the Texas state border, through Oklahoma City. Its intersection with I-235 is a high-traffic zone with congested traffic. Therefore, drivers must be cautious when maneuvering through traffic.

I-44 cuts through Oklahoma diagonally, from Burkburnett, TX, near the southern state border, and ends in Ottawa County before proceeding to Joplin, MO. However, the section connecting Oklahoma City and Tulsa (Turner Turnpike) is a critical shipping route with some heaviest truck traffic. It has a speed limit of 75 mph and ranks as the most dangerous part of I-44. Hence, drivers and motorists must exercise extra caution when approaching traffic and switching lanes. I-235 (Central Expressway) is a 5.4-mile spur route along I-35 connecting central and north-central Oklahoma City.