Heavy Equipment Transport is Alaska’s top rated oversize machinery and equipment shipping company. Alaska has the coldest, longest winters, the coldest summers, and most days throughout the year that experience freezing weather. It also has rugged terrain that needs to be navigated carefully. This is especially true for oversize or super loads that require extra preparation and care, such as permits and escort vehicles. Heavy Equipment Transport has over a decade of experience shipping equipment to and from Alaska. We provide top quality freight shipping at the most affordable rates.

As a reputable heavy equipment transport service provider, we offer a range of heavy equipment transport services that provide safe machinery shipping throughout even the most rugged terrains of Alaska. One of the most common routes to ship equipment is the Alaska Highway that runs north and south from Yukon to various destinations in Alaska. Using this route, we tow heavy equipment to and from major cruise ports, including the Haines port near Glacier Bay and Skagway on the Alaskan Panhandle. We can also help you to haul heavy machinery from Fairbanks to Anchorage, or Glenallen to Valdez. However, Heavy Equipment Transport will ship your oversize load wherever you need it delivered in Alaska. Call us now and get an estimate to ship your equipment to Alaska! (888) 730-2951 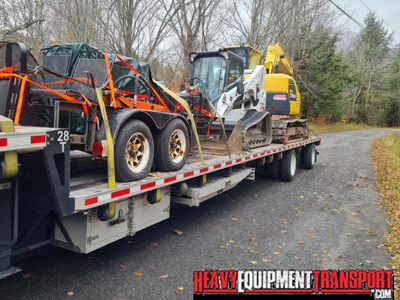 Heavy Equipment Transport finds the best semi truck transport rates in Alaska.Whether you need to ship a semi truck across the state, or have it transported through Canada to one of the contiguous lower forty-eight states--or even to Hawaii, we’ll provide the best shipping service at the most affordable prices. A dedicated logistics agent tailors Alaska semi truck transport to fit your needs.

Drivers will often need to navigate rugged wilderness when transporting semi trucks in Alaska. We regularly handle semi truck transport to and from cruise ports, major cities, small towns, and remote locations in Alaska, and know many drivers comfortable and experienced with this terrain. With us, you'll always have a tractor trailer shipping partner ‌you can trust to get your equipment safely to its next stop. Transport your semi truck to Alaska today! (888) 730-2951.

In total, there are four major Heavy Equipment Transport tractor trailer routes that our drivers use to transport semi trucks through Alaska.

The Alaska Highway is the main route connecting the United States to Alaska through Canada. The highway begins at a significant juncture in Dawson's Creek, B.C., and ends in Delta Junction. After crossing the Yukon-BC border, the road continues north-northwesterly to its final terminus at Delta Junction, passing east of Fairbanks.

The A-4 highway runs parallel to the Alaska Railroad and is one of the most important routes through the state because it's the primary connection between Anchorage and Fairbanks. Two sections of this road are built to freeway standards: a portion near its intersection with Glenn Highway in Palmer, and the Robert J. Mitchell Expressway in Fairbanks that leads to the Richardson Highway. Call today! (888) 730-2951.

SHIPPING CONTAINER TRANSPORT TO EVERY CORNER OF ALASKA

Alaska is the largest state in the United States, with an area more prominent than the total area of the three following states. Initially, the Russians ruled Alaska, who later sold it to the Americans for difficulty in its management in 1867. In 1912, it was organized as a territory and later admitted as the 49th United States in 1959. The significant economic contributors to its economy today are fishing, oil, natural gas, the United States Armed Forces, and tourism. Tourism is expected as more than half of the state comprises national parks, national forests, and wildlife refuges on federally owned public land.

Alaska has untampered scenic beauty. Cruising in ships is not an experience enough before experiencing the mega glaciers. The wildlife in Alaska is unique; get to see various types of whales, bald eagles, mountain sheep, wolves, caribou, moose, and bears. Enjoy the state's rich culture and history in museums such as the Alaska State Museum and learn more about the gold rush history at the Klondike Gold Rush National Historical Park. The best part about Alaska is meeting its natives, who are very cordial, and the local cuisine. Remember, Juneau, the state’s capital, featured on Bravo TV’s Top Chef.