The Best Machinery and Semi Truck Shipping in New York

For the best equipment shipping company in New York, call Heavy Equipment Transport. We’re the most reliable transport company to ship oversized equipment, from agricultural machines to large-scale construction equipment, throughout New York. To ship heavy machinery in New York, you need an experienced company. We ship heavy equipment between many major cities, including New York City, Buffalo, Rochester, Syracuse, Huntington, and Albany. We also ship equipment to and from the more remote areas of New York.

Served by nine main interstates and more than 20 auxiliary routes, the Empire State is very well connected, and you'll often see heavy machinery moving services taking advantage of the 2,692 km of highway to deliver heavy equipment. Whether it's an oversized crane, agricultural equipment, heavy construction machinery, or a piece of equipment that requires a customized delivery service, our heavy equipment shipping service will transport it smoothly. Call Heavy Equipment Transport and ship your machinery to New York now! (888) 730-2951 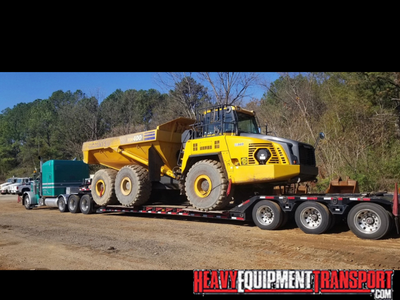 Transport semi trucks to or from New York with the best shipping company. Heavy Equipment Transport knows all of New York State routes, and DOT laws governing heavy and oversized cargo transport. We are a nationally recognized semi truck shipping company, with the ‌resources, rigs, and equipment to ensure that your semi truck is delivered to New York Safely. A dedicated logistics agent will guide you through every step of the process.

When shipping semi-trucks to and from New York, our drivers use the major commercial transport routes. The state has many interconnected highways, but the major ones include:

When shipping semi-trucks from New York City westward to New Jersey, I-78 is the ideal route. It starts from Holland Tunnel, providing smooth and easy shipping. 1-84 begins near Port Jervis at the New York/Pennsylvania border and heads east through Orange, Putman, and Dutchess before reaching the Connecticut border. I-87 is about 330 miles long and leads to Montreal. The Major Deegan Expressway is a rough section of the road, and drivers must take caution when driving here.

Another common shipping route is I-90, which stretches 386 miles from Ripley, right at the Pennsylvania border, to Massachusetts through Connecticut. In New York, the highway is part of the state's Thruway System, serving major cities like Buffalo, Rochester, Utica, and Syracuse. In New York, I-95 is a relatively shorter highway, starting from the northern New Jersey border, over the Hudson River, and into New York City. The road ends at Connecticut Turnpike near the state's northern border.