Shipping heavy equipment through Oregon requires quality, precision, and experience. Heavy Equipment Transport combines interstate equipment shipping with port-to-port transfers and heavy machinery towing to and from airports, including major destinations such as Portland, Medford, Eugene, and Redmond. Heavy equipment moving through our transport network may also include delivery to and from Pacific Ocean ports and inland ports on the Columbia River.

Wherever you need us to ship your oversize load in Oregon, our heavy machinery shipping service will incorporate suitable transport methods to help get your equipment transported safely. We deliver heavy machinery of all types, from all major manufacturers to every location in Oregon. Shipping equipment is our specialty, whether you need our heavy machinery transport services to ship your heavy equipment to destinations in Portland, Medford, or beyond. It doesn't matter to us if it's an oversized crane, water tank, or heavy-duty truck, our comprehensive transport services will connect your equipment with its next destination seamlessly. Get your Oregon equipment shipping estimate now! (888) 730-2951 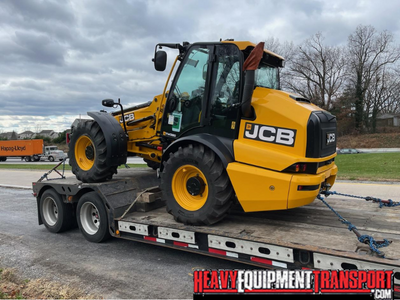 Heavy Equipment Transport makes semi-truck shipping in Oregon a hassle-free experience. We are a leading tractor trailer shipping company in the United States with a reliable team of professional logistics specialists in Oregon. Therefore, you can depend on us to provide high-quality semi truck transport for all your Oregon shipping needs.

With Heavy Equipment Transport, you get unmatched semi truck shipping at competitive prices. We are one of the few nationally acclaimed heavy haulers with highly competitive shipping rates. Our tractor trailer transport quotes are based on transparency, honesty, and accountability. We'll help you identify areas where you can save money to ensure you pay a reasonable price for the semi truck shipping services. Call now! (888) 730-2951

I-5 (Pacific Highway 1) is a major freeway in Oregon, covering about 308 miles. Starting near the southern city of Ashland, I-5 connects Portland to other major cities, such as Salem, Medford, and Eugene. Highway 97 is a two-lane road that spans from the California state line near Klamath Falls and spans north up to the northern border near Biggs Junction, OR. It's a busy and dangerous shipping route with a maximum speed limit of 65 mph. The two roads are the most important shipping routes in the state.

Another major shipping route in Oregon, Highway 199, stretches from the California state line and runs 88 miles northeast to Grants Pass. It passes through Cave Junction and Redwood before reaching its terminal point at the intersection with I-5. On the other hand, Highway 101 is the iconic route running along Oregon's Pacific Coast from Brookings, OR, near the California state border and reaching the Washington borderline, on the Columbia River. The road facilitates heavy-cargo trucking, linking the major coastal cities like Gold Beach, Coos Bay, Reedsport, Lincoln City, Pacific City, and Nehalem.