Need To Transport Equipment or Machinery In Florida?

Heavy Equipment Transport has shipped equipment and oversize loads through Florida for over a decade. Door-to-door transport and port-to-port shipping requests are a daily occurrence, and we've got the trucks, trailers, and experienced haulers available to help you at short notice. Shipping heavy machinery in Florida requires local expertise to provide the most efficient transport services. Heavy Equipment Transport is Florida’s best equipment shipping company.

We're the premiere shippers of oversized, heavy machinery in the country, serving major Florida cities as well as nationwide heavy machinery delivery locations. Our heavy equipment delivery services are highly customizable, and we can help you to move equipment and machinery of any size and weight. Even if your shipment is too large for standard 5-axle transportation, we can provide extended RGN trailers, drop deck, and double drop deck trailers that can handle even the most significant loads. Call now and get a quote to ship your equipment to Florida!(888) 730-2951

Equipment We Commonly Transport in Florida

Alton Bates Jr helped a client transport this 27.5L 8.4W 8.4H and 29,500lbs Gradall 534D-10 telescopic reach forklift telehandler from Tampa, FL to Woodburn, OR. After looking at the specs, he chose a flatbed trailer for efficiency and easy loading. Since the client had paid for our expedited services, Alton was quick to process and dispatch the shipment. To transport a Gradall 534D-10 telescopic reach forklift telehandler, call us now! 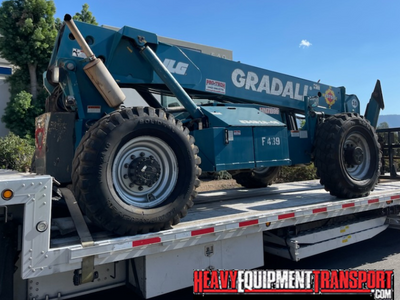 
The I-10 is a 362-mile highway in Florida that forms the easternmost part of an interstate that runs east-west through the U.S. The road follows a similar course to the US 90 highway, but it's a more direct route through the state as it avoids the central locations of many Florida cities. The western terminus is near Pensacola, in Escambia County. Before exiting Florida, the route crosses multiple rivers, including the Perdido River at the border and the Blackwater River, before passing through the Osceola National Forest. Towards the east, the highway travels until it meets its end in the Brooklyn neighborhood of Jacksonville's urban center.

The I-75 runs between the Hialeah-Miami Lakes border just north of Miami to the Upper Peninsula of Michigan. It's a north-south highway that begins its journey northward by curving around the Miami Lakes border and passing the Miami metro area, before traveling west across Alligator Alley. Past Alligator Alley, the road turns back north, heading into Naples and following the Gulf Coast, passing Fort Myers, Venice, Sarasota, and other major cities. The freeway then visits the Tampa Bay Area before moving inland to connect travelers to Gainesville and Lake City before its exit to Georgia.

I-95 is the main highway serving the Atlantic Coast, connecting downtown Miami to Daytona Beach, Jacksonville, and beyond. The route also serves Fort Lauderdale, Titusville, and West Palm Beach. It connects many airports along its northerly path, including the Fort Lauderdale-Hollywood Airport, Palm Beach International Airport, and Jacksonville International Airport.

Which Trailer Type Do you Need?