Shipping heavy equipment in New Hampshire comes with top quality service at Heavy Equipment Transport. Let the experts handle your oversize load, and you can focus on what matters. We know that project deadlines are essential and that heavy equipment is crucial to a wide range of industries, from construction to power generation. We ship equipment to and from New Hampshire with top safety standards.

Sam Duncan safely delivered this Link-Belt 145X4 LC crawler excavator from Concord, NH to Theodore, AL for a client who had just bought the equipment. An RGN trailer was used to transport this 25L 102W 10H and 35000lbs because it would accommodate its weight and size evenly. Contact us today to transport a Link-Belt 145X4 LC crawler excavator now! 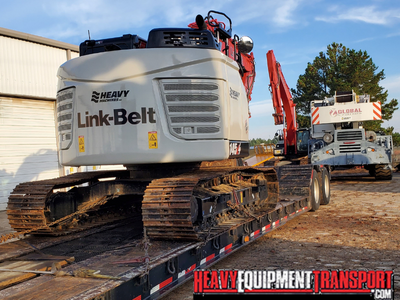 I-89 is a primary route in the western part of the state, connecting the state's capital, Concord, with the city of Lebanon on the Vermont state line. Also easily accessible from the I-89 in New Hampshire are the towns of Warner, New London, and Grantham. Starting just south of Concord, the highway takes a northwesterly path through the Dartmouth-Lake Sunapee region and continues northwest through Lebanon into Vermont.

I-95 travels through New Hampshire's Seacoast Region, through Portsmouth into neighboring Maine. For its majority, from the border of Massachusetts to the Portsmouth Circle, follows the New Hampshire Turnpike. Despite its short 26km length through the state, it's a vitally important route connecting six major municipalities: Seabrook, Hampton, Hampton Falls, North Hampton, Greenland, and Portsmouth.