Heavy Equipment Transport is the best equipment shipping company in Montana. Heavy machinery towing in Montana doesn't have to be stressful. Whether you need to ship LTL freight, an oversize load, or equipment in bulk, we have the resources to transport safely and deliver on time. We provide suitable trailers, scout transport routes, source experienced haulers, and make sure every shipment meets the rules and regulations of Monta equipment shipping. Your equipment is shipped with top quality services at Heavy Equipment Transport.

We specialize in equipment shipping to and from Montana. Every piece of heavy-duty equipment in our care is treated with respect and handled safely. We secure all equipment shipped through our heavy machinery delivery services, using appropriate protective methods from steel banding to blanket wraps for sensitive equipment. We don't just tow equipment from one location to another, we help you with the loading, offloading, tracking, and coordination of every heavy machinery delivery you require in Montana. Get your Montana equipment shipping quote now! (888) 730-2951

MARK II TAMPER AND CART ON AN RGN TRAILER 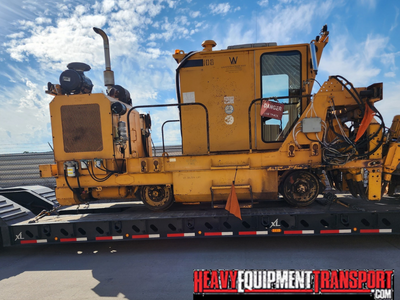 Our semi truck transport specialists often utilize many of the interstate routes that connect cities in Montana to other parts of the U.S. Popular routes include:

I-15 crosses into the state from Idaho south of Lima Reservoir before continuing in a northwesterly direction through farmland and desert until reaching Clark Canyon Reservoir. Past Clark Canyon, the highway turns north then northeast towards Dillon. The route passes near the Lookout State Park before running parallel to the Big Hole River for a stretch before turning northwest through the desert and traveling along Divide Creek.

I-15 merges with the I-90 for a time before splitting off into the forest and plains north of the I-90 and following Bison Creek and the Boulder River. It also passes through the mountains, servicing towns such as Basin, before winding down through Jefferson City, Helena, Cascade, Ulm, and Great Falls. The last city on its journey through Montana is Sweet Grass.

A major east-west highway in Montana is the I-90, which links Seattle to Boston. In Montana, the route consists of almost 900km of road and passes through more than a dozen counties in the southern and central portions of the state. It enters from Shoshone County in Idaho over the 1,440m high Lookout Pass, which travels through the Coeur d'Alene Mountains of the Bitterroot mountain range.

I-90 travels in a southeasterly direction through woodlands before reaching St. Regis and continuing east, passing south of Alberton. The I-90 connects Missoula, Granite, and Powell counties before entering Deer Lodge, Silver Bow, and Jefferson. From here, the route enters Broadwater, Gallatin, and Park, before serving Sweet Grass and Stillwater and exiting the state.