Nebraska is known for its agricultural businesses, food processing, advanced manufacturing, and renewable energy industry. Naturally, each of these industries also requires a plethora of heavy equipment to be successful. That’s where Heavy Equipment Transport comes in. We ship equipment and oversize loads throughout Nebraska. Our professionals will coordinate, schedule, load, offload, and transport any machinery you require, even at short notice. Get your equipment shipping rate now! (888) 730-2951

Brian Gochansky helped a construction company transport this 25L 6.5W 8.6H and 15000lbs Bobcat S510 skid steer from Omaha, NE to Widener, AR. A hotshot trailer was used to transport the heavy equipment and it was delivered on time. To transport a Bobcat S10 skid steer, give us a call us now! 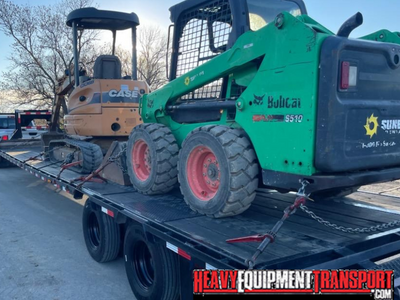 Heavy Equipment Transport is the go-to semi truck company in Nebraska. Locals know when they need to ship a new or used semi truck from Nebraska that Heavy Equipment Transport is the company to get it done right. For over a decade, we have built a reputation as a reliable semi truck shipping company that our clients rely on. Shipping semi trucks to or from Nebraska is done with top-quality service at the most affordable rates. We pre-plan the route for efficient transport and on time delivery.

As semi truck shippers in Nebraska, our crews will often utilize some of the state's busiest roads, including:

I-80 runs east to west from the Wyoming state border to Omaha. This is the only interstate that crosses from one edge of the state to another, and there is no north-south highway. There are 80 exits along the I-80's route in Nebraska, and the highway serves as a primary transport route. Most of the route travels through plains, and the road between Lincoln and Grand Island has very few curves. Traveling from one end to the other along the I-80 in Nevada, you'll come across more than 80 interchanges, cross more than 440 bridges, and pass 25 rest areas, each spaced approximately 56-80 km apart.

Another busy route in Nebraska is U.S. Highway 6. It connects the Colorado border to the west of Imperial to the Iowa border past Omaha in the east. Entering the state from Colorado, the route travels southeasterly before turning east until reaching Imperial. From Imperial, the road continues to the Enders Reservoir State Recreation Area before continuing southeasterly until just west of Culbertson.

Route 6 and Route 34 continue east to McCook, where the routes turn northeast to Cambridge then east to Arapahoe. The route follows an easterly direction until nearing Holdrege, where it turns to the northeast to pass through Minden and Heartwell. Past Heartwell, Route 6 heads due east through Hastings, then on to Sutton and Fairmont before crossing the state border.