Heavy Equipment Transport is Rhode Island’s best equipment shipping company. We transport bulldozers, crawler tractors, wheel loaders, and more types of construction equipment to Providence, Warwick, and Newport. We ship oversize loads anywhere from the biggest cities to the most rural parts of Rhode Island. Whatever your equipment shipping needs, we get it done right.

Every time we ship machinery through Rhode Island, we make sure that our heavy equipment moving service combines everything needed to provide safe and secure delivery. Whether your oversized construction equipment needs crane loading or your agricultural equipment needs to be loaded onto a drop deck trailer, our skilled team will handle this for you. Heavy Equipment Transport is ready to ship your equipment throughout Oregon today. Get your shipping estimate now! (888) 730-2951

Jackson Weeks was involved in the transportation of this 45L 11.7W 12.5H and 88000lbs 2000 CAT 623K elevating scraper from Amber, OK to Providence, RI. He gathered transport permits because it exceeded maximum limit and decided an rgn trailer would be the most suitable because it would accomodate the weight and size evenly. To haul a 2000 CAT 623K elevating scraper safely, call us today! 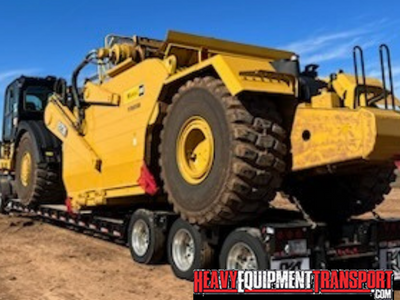 Transporting a semi-truck in Rhode Island requires a company that understands the state laws, and how to ship out of state. Heavy Equipment Transport is a reliable and industry-seasoned tractor trailer transporter, and you can trust us to move your tractor trailer safely. We transport semi trucks everywhere in Rhode Island, and other states.

As the leading semi truck shipping company in the US, you can rely on our flexible shipping solutions to enjoy a hassle-free and convenient shipment. We can ship any semi truck meant for vocational functions, from garbage trucks and cement mixers to food trucks and tow trucks. Heavy Equipment Transport is your go-to semi truck transporter in Rhode Island. Get your tractor trailer transport quote now! (888) 730-2951

The following are the primary highways and state routes used for commercial shipping and heavy-equipment transport.

Interstate 95 is the major north-south shipping route in Rhode Island. It starts at the Connecticut state line, near Westerly and passes through major cities, such as Warwick and Providence, before ending at the Massachusetts border, near Pawtucket, Providence County. Also known as Providence Beltways, I-295 is an auxiliary shipping route serving Rhode Island and Massachusetts. It spans 27 miles from a split way, south of Providence, near Warwick and loops around the city's western part before entering Massachusetts.

Another famous trucking highway is the I-195. It's an ideal route if you need to ship semi-trucks from Providence to southeast Massachusetts. It begins from an intersection with I-95 in Providence and runs east, covering about 44 miles to Wareham, Massachusetts. The section in Providence is a high-traffic zone, with commuters and driving Rhode Islanders using the road to and from the city. Our drivers are licensed and insured; they're experienced in shipping trucks on high-traffic, high-speed highways and two-lane urban roads.