Heavy Equipment Transport ships all oversize loads through the Beehive State confidently. When you need to ship heavy machinery, you'll need quality and safe transport services. We ship heavy equipment throughout Utah with the best services in the industry. Ship your equipment and oversize loads through Salt Lake City, Provo, West Valley City, and other areas of Utah.

Heavy Equipment Transport has over a decade of shipping experience. We are a top-rated oversize load transport company that moves all equipment and machinery throughout Utah. Residents know they can rely on us to ship their freight safely and deliver on time. A dedicated logistics agent will walk you through every aspect of Utah equipment shipping. Call now and get your Utah equipment shipping quote! (888) 730-2951

Amanda Sibley coordinated the transportation of this 2004 LINK-BELT 240 X2 long front hydraulic excavator from Sandy, UT to Guthrie, OK. Having done this in the past, she knew the documents to acquire and an RGN trailer was used to safely transport the 566L 133W 124H and 61729lbs equipment safely. To transport a 2004 LINK-BELT 240 X2 long front hydraulic excavator at affordable costs, call us today! 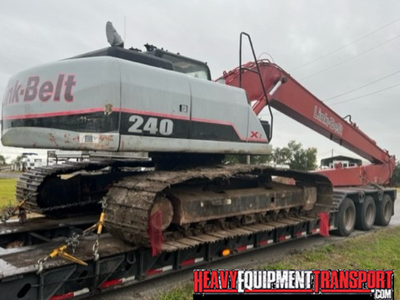 Shipping your semi-truck can become complicated and frustrating if you do not partner with a reputable transport company. To enjoy a hassle-free tractor trailer shipping experience, call Heavy Equipment Transport. We have a dedicated team ready to implement your instructions to the letter. We provide top quality semi truck transport services all across Utah.

Our drivers are also professional and experienced in shipping semi-trucks in Utah and even to the neighboring states.We are licensed, bonded, and insured for all tractor trailer transports. Heavy Equipment Transport ships all across the United States with ease. Call us now for Utah semi truck shipping services! (888) 730-2951

Dutifulness is an integral quality of every Heavy Equipment Transport staff. We take responsibility for every single semi truck shipment, ensuring it reaches you in its original condition. Our drivers are familiar with Utah roads and know how to move around major highways like:

I-15 runs north-south of Utah, passing through most of the state's population centers and those comprising Salt Lake City, Provo–Orem, and Ogden–Clearfield. It then merges with I-80 for about 3 miles, followed by I-84 from Oregon to Tremonton.

I-70 connects Utah to Maryland. The Utah stretch is about 232 miles across the central part of the state. I- 70 was the second attempt to connect Southern California to the east coast of the US through central Utah. I-215 is an auxiliary interstate also locally known as the Belt Route. The route begins at the junction with I-80 at the mouth of Parley Canyon and heads south, eventually reaching I-15.