When it's time to ship equipment in Ohio, there's no one better company than Heavy Equipment Transport. We transport anything from LTL loads to oversize freight all across Ohio. From excavators and dump trucks to cranes, mining equipment, pumps, and water tanks, you’ll get the best and most reliable shipping services. Our extensive range of trailer choices include flatbeds, step-decks, RGN, extended RGN, and extended drop-deck trailers that can move heavy machinery, even if it weighs more than 150,000 lbs.

Heavy Equipment Transport provides top quality Ohio shipping services at the most affordable rates. Your equipment is in the safest hands when you ship with us. We ship equipment and oversize loads through Ohio and neighboring states. Whether it's traveling to one of the busy Lake Erie ports such as the Port of Cleveland or entering Ohio from one of the international airports in Columbus, our heavy machinery shipping service can help to facilitate onward travel. Get your Ohio equipment shipping rate now! (888) 730-2951 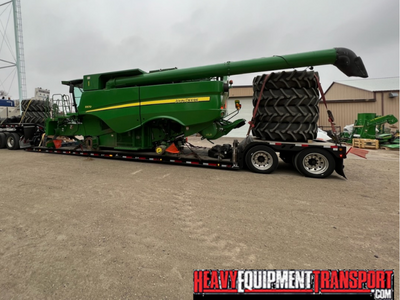 Ohio has an elaborate network of shipping routes, majorly on highways. Our drivers are seasoned in transporting heavy cargo on these routes, regardless of the weather condition or hauling distance. The primary shipping routes include:

I-70 is a critical shipping route, which is an integral part of the state's commerce. It stretches 225 miles from the Indiana state border, winding through Preble, Clark, Montgomery, Madison, Franklin, Fairfield, Muskingum, and Belmont counties. Another important shipping route is I-71, which covers about 248 miles from the southern state line to Cleveland. It's one of the most hazardous roads, and drivers must drive while on high alert.

Starting from Cincinnati, near the Ohio/Kentucky border, I-75 cuts across the state to the northern town of Toledo, right at the Michigan state border, and passes through major cities like Middletown, Dayton, Lima, Findlay, and Bowling Green. I-76 enters Ohio from the east, near Youngstown and covers about 81 miles, ending at Wadsworth town, near Akron, in Medina County.