Iowa only has three interstates, the I-29, I-35, and the I-80. Two of the state's major interstates run through the state's capital, Des Moines. Des Moines is the heart of Iowa and a central hub of activity for many heavy equipment shipping specialists. Heavy Equipment Transport knows the ins-and-outs of Iowa equipment shipping and provides the best service in the industry. Get your shipping rate now! (888) 730-2951

We offered our power only shipping services to transport this 43L 10W 13.6H and 64000lbs RG-1 shingle grinder from Remsen, IA to Little Rock, AR. Kevin Bragdon, ourheavy equipment shipping specialist, was incharge of the haul. He acquired the much needed paperwork before contacting our driver near where the equipment was located. For safe and reliable RG-1 shingle grinder shipping services, give us a call us today! 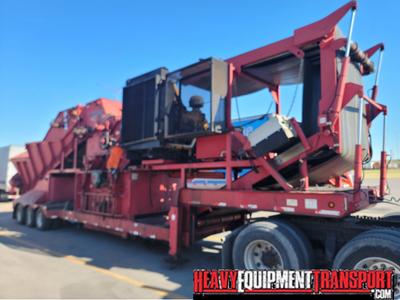 TRANSPORTING ALL NEW AND USED SEMI TRUCKS TO IOWA

When you choose to work with Heavy Equipment Transport, you're selecting a semi truck shipping company with more than a decade of experience handling semi truck towing requests. When it comes to semi truck transport, there's no one better equipped than our extensive network. From the largest cities, such as Des Moines and Cedar Rapids, to even the most remote locations, we can transport semi trucks through out Iowa and neighboring states. Our dedicated logistics agents determine the best route at the most affordable pricing for your Iowa semi truck transport. Call now and get your semi truck shipping rate! (888) 730-2951

Our professional semi truck towing specialists often utilize many of the interstate routes that connect cities in Iowa to other parts of the U.S. Popular routes include:


I-29 is an interstate highway that runs north-south and parallels the journey of the Missouri River through Iowa. The road enters Iowa near Hamburg, following a north-northwesterly route through the Omaha-Council Bluffs connecting the Sioux City areas. Throughout its journey, the highway route is entirely flat, never straying from the land between the Missouri River and the nearby Loess Hills. On its exit from Iowa, the road crosses into South Dakota over the Big Sioux River.

Another north-south interstate in Iowa is the I-35 that connects Duluth in Minnesota and Laredo in Texas through the center of Iowa. The highway enters the state near Lamoni and continues northward through southern Iowa's drift plain. Just north of Lamoni, there's a rest stop overlooking the Grand River that provides access to the Slip Bluff County Park. When it reaches Des Moines, the I-35 overlaps the I-80 highway, and both bypass the center of Des Moines to the north and west. On the west route, the I-35 turns north to go through Ankeny and Ames, continuing northeast to the Wright County line and beyond.

The I-80 in Iowa travels west to east, entering the state in Council Bluffs and also threading through the southern Iowa drift plain. I-80 continues east after des Moines, and in eastern Iowa provides access to the University of Iowa located in Iowa City. Northwest of the Quad Cities, the highway has the world's largest truck stop. The route then continues onto northern Davenport and Bettendorf before leaving Iowa on the Fred Shwengel Memorial Bridge.