Whether you need to ship heavy equipment from Duluth into Iowa along the I-35 or are simply looking for us to deliver heavy machinery across town, we can assist you. Our statewide haulers in Minnesota provide Heavy Equipment Transport towing services in and around Minnesota, the Upper Midwest, and throughout America, Canada, and Mexico. Heavy Equipment Transport ships equipment and oversize loads anywhere in Minnesota. Get your shipping rate now! (888) 730-2951

Brian Gochansky was assigned to transport this 18L 8.5W 10.6H and 20000lbs John Deere 6215 tractor from Rochester, MN to Worcester, MA. The client needed the farm equipment delivered urgently and paid for our expedited services. Brian ensured the shipment met all the requirements before dispatching it on an rgn trailer and it was delivered safely and on time. Call us now to ship a John Deere 6215 tractor! 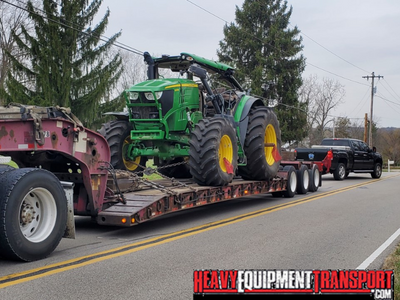 In Minnesota, our Heavy Equipment Transport company can be seen using busy shipping routes, including the following highways:

I-35 is a highway that stretches between north and south Minnesota, beginning in Laredo, TX, and ending in Duluth. I-35 enters Minnesota from the Iowa state line near Albert Lea and heads north to the Twin Cities. Just south of the metro area, the I-35 splits in two, with the eastbound route going through St. Paul and the westbound route heading into Minneapolis. North of the Twin Cities, I-35E and I-35W merge and head north to Duluth, ending near Lake Superior's shore.

I-95 is a 259-mile route that stretches from east to west through central Minnesota. As it connects Moorhead, Fergus Falls, St. Cloud, Alexandria, Minneapolis, and St. Paul, the highway is an integral transport corridor. From Moorhead at the North Dakota state line, the route heads southeast through the rising and falling ex-glacial terrain until the last beach line at Rothsay. Along the way from Rothesay to Minneapolis, there are frequent lakes visible from the road. After it leaves Minneapolis and St. Paul, the road navigates Washington County and exits near Lakeland, Minnesota.