For over ten years, Heavy Equipment Transport (HET) has provided high-quality, safe, and timely semi truck shipping throughout the US, including Oklahoma. We have a high compliance policy with the state's DOT trucking laws and regulations to ensure that your tractor trailer transport travels within the state legally and seamlessly. That said, we'll retrieve the semi truck transport permit, which will allow us to get through police checkpoints undisturbed.

Efficiency is key when shipping a semi-truck and HET has mastered the art of providing timely transport services. Our professionals will be at the pick-up point in time to ensure that the tractor trailer shipment gets to the delivery area without having to breach the state's travel time limits. Call now! (888) 730-2951

Quality Oklahoma Semi Truck Shipping Services You Can Rely On

Heavy Equipment Transport is committed to ensuring that your tractor trailer transport is well-protected during haulage. We demonstrate that dedication through our liability insurance. We rank among the leading heavy haulers with $2,000,000-worth of insurance, and you can be sure that you'll receive your semi truck transport in one piece, regardless of any mishaps or unforeseen circumstances. We also hold a surety bond to assert our ability to start the logistics process and complete the semi truck shipment without any issues or blemishes.

We cover all safety protocols to keep the in-transit load and the transport team safe. We use project-specific loading equipment and transportation rigs; our communications systems also allow us to easily monitor the load as it traverses various counties to ensure that the semi truck transport safely reaches your intended destination, whether it's destined for Oklahoma City's busy industrial area or to a low-traffic zone, such as Perry in Noble County. Let’s get started! (888) 730-2951

We are the best company to ship your semi truck in Oklahoma. We easily ship your tractor trailers on the major hauling routes in Oklahoma, including:


Extending from Thackerville, at the Texas state border, to Braman, near the northern state border, I-35 covers about 235 miles. It passes through important commercial centers like Ardmore, Norman, Oklahoma City, Seward, Perry and Blackwell. The route is especially busy with traffic as it approaches Oklahoma City from Norman and Moore, where thousands of people drive and commute to work in the city. I-40 runs east from western Fort Smith, Arkansas, to Erick, at the Texas state border, through Oklahoma City. Its intersection with I-235 is a high-traffic zone with congested traffic. Therefore, drivers must be cautious when maneuvering through traffic.

I-44 cuts through Oklahoma diagonally, from Burkburnett, TX, near the southern state border, and ends in Ottawa County before proceeding to Joplin, MO. However, the section connecting Oklahoma City and Tulsa (Turner Turnpike) is a critical shipping route with some heaviest truck traffic. It has a speed limit of 75 mph and ranks as the most dangerous part of I-44. Hence, drivers and motorists must exercise extra caution when approaching traffic and switching lanes. I-235 (Central Expressway) is a 5.4-mile spur route along I-35 connecting central and north-central Oklahoma City. 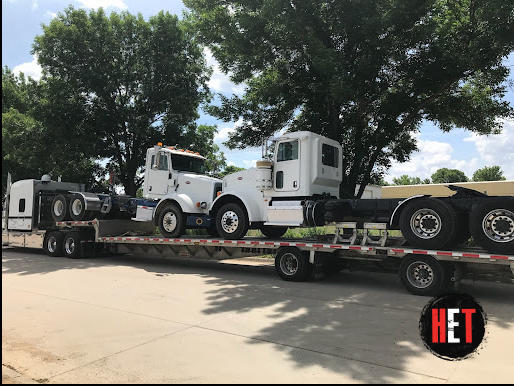 We successfully transported a 2019 Ford F60 semi truck from Edmond, OK to Terre Haute, IN safely.

Daniel Jean was assigned to transport a 2019 Ford F60 semi truck from Edmond, OK to Terre Haute, IN. The client had paid for our expedited services because they wanted their semi truck delivered urgently. Therefore, Daniel started working on the shipment immediately. He fully insured it and acquired the much needed documents for transport. We fully insure each semi truck before transport and make the client a holder of the insurance cover so that in case of an accident, they can claim full compensation from the insurance company. Daniel Jean decided that a double drop deck trailer was the most suitable for transport.

We recommend the best trailer for transport based on weight and dimensions of a semi truck. Daniel Jean called one of our drivers near the pick up location and gave him all the important details about the shipment. On the date given by the client, our driver went to the pick up location together with some rigger men where they carefully loaded the trailer and secured it for transport. When Daniel Jean dispatched the shipment, he advised the driver to use route I-44 E. Along the way he made regular checks where he checked the shipment and secured the loose straps. He eventually got to deliver the semi truck safely.

We offer affordable, timely and reliable semi truck transport to and from Oklahoma.

2019 Ford F60 Box Semi Truck Transport Below are the pick up and delivery locations of the semi truck.