Transporting Containers To and From Connecticut

A Professional and Reliable Shipping Container Transport Company in Connecticut

With Heavy Equipment Transport, nowhere is out of reach. We offer container moving services in every city in Connecticut. We assign each shipment to a specific agent whom clients can call at any time until their shipping container is safely delivered. Our agents process the paperwork, fully insure each shipping container, recommend the most suitable trailer for transport and oversee the loading process before dispatching the shipment. All our clients are made holders of the insurance. This is to ensure that in case their shipping containers aren’t delivered in the condition they were picked in, they can claim full compensation from the insurance company. Our shipping container moving services in Connecticut are hassle-free and available at any time of the year.

This 40L 8.6W 9.6H andn 9000lbs 20ft storage container was transported from Waterbur, CT to Nicholasville, KY by the help of Janelle Foltz. She acquired transport documents and contacted a loading company who carefully loaded the 20ft container on a flatbed trailer. To transport a 20ft shipping container safely and on time, call us now!

TRANSPORTING A 20FT SHIPPING CONTAINER ON A FLATBED TRAILER 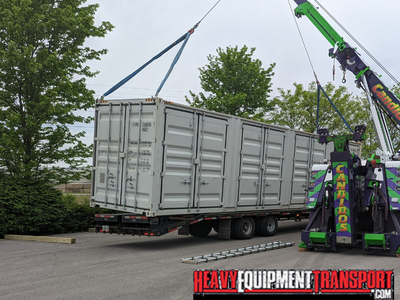 The Ins-and-Outs of Connecticut and Container Transport

Connecticut is historically a part of New England and the tri-state with New Jersey and New York. It’s named for the Connecticut River. The merger of the Connecticut Colony, the Saybrook colony, and the New Haven Colony made it a crown colony in 1662. Connecticut was among the thirteen colonies against British rule in the American Revolution. Today Connecticut is among the least states by area but the fourth-most densely populated state in America. It’s nicknamed the “Constitution State,” the “Provisions State,” the “Nutmeg State,” and the “Land of Steady Habits.”

Tourism is common in Connecticut, primarily due to its strategic location between New York City and Boston, making it easily accessible. The outdoor enthusiasts have a lifetime of fun here. There are activities such as cross-country skiing, hiking, sailing, roller coasters, designer outlet shopping, and gambling in plenty of casinos. In addition, you can travel back in time through the state’s museums, such as the Mystic Seaport Museum. It's here also that you get access to dozens of lighthouses up and down the coast of the northeastern United States. The family-friendly city also has amusement parks and aquariums, and science centers for you and your kids to be happy.

We offer shipping container moving services to and from every port terminal in Connecticut. Below are the ports we serve together with terminals together with their contacts and addresses.