Transporting Containers To and From Florida

Top Quality Container Shipping To and From Florida


Transporting Containers Throughout Florida with Ease

Our specialists are experienced and process each container shipment before the pick-up date given by the client. They also recommend the most suitable trailer for container moving services in Florida. To make communication easy and fast, we allocate each shipment to a specific agent whom clients can call at any time of the day. Our agents oversee the loading process to ensure each container is handled with utmost care before its dispatched. Our drivers are professionals with knowledge of the best routes to use to make our container transport services in Florida fast and timely. Our container moving services in Florida are available in each and every city. We’re not limited to any locations or routes.

SHIPPING A 40FT HIGH CUBE CONTAINER ON A HOTSHOT TRAILER 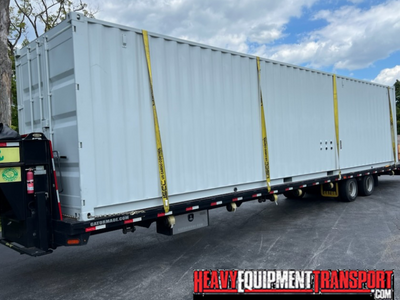 We Know Florida and How To Transport Containers Throughout the State

Florida was acquitted by the United States in 1819 and declared the 27th state years later in 1845. Florida’s 1 trillion dollars economy depends on agriculture, hospitality, transportation, real estate, and tourism. The warm and sunny climate makes it a popular destination for tourists. Millions are attracted yearly by the beach resorts, amusement parks, and recreational centers such as the Kennedy Space Center, Walt Disney World, and Miami Beach. International migrants, retirees, seasonal vacationers, athletes, and celebrities converge in Florida. The array of outdoor sporting activities for you here is endless, including water sports, golf, and tennis.

The state's uniqueness lies in its subtropical and tropical climates, the latter only found in Hawaii besides Florida. The Everglades National Park highlights its distinctive ecosystem. Some of the beaches in Florida exhibit turquoise and emerald-colored coastal waters. You will see some rare wildlife species in Florida, such as the Roseate Spoonbill, Florida panther, American alligator, and crocodile. In the afternoons, escape the thunderstorms and engage in indoor learning and fun in Florida’s museums, such as the St. Augustine Pirate and Treasure Museum.

This is the largest port in Florida and the most diversified. It deals with containerized cargo. Below is the address and contact.
Port of Tampa Container Terminal 2999 Guy Verger Blvd Tampa, FL 33605 United States

This is the 14th largest container port and 2nd largest vehicle handler in the country. Below are the cargo facilities with their addresses and contact.
Blount Island Marine Terminal

This is one of the largest vehicle export/import facilities in the country. Below is the address.

This facility deals with containerized cargo, bulk commodities, and break bulk cargo. Below is the address and contact.

This is a container port. Below is the address and contact.

This is the 4th largest container port in Florida. This port deals with dry bulk, containerized, liquid bulk, roll-on/roll-off, and break bulk. It can be accessed through I-95, Florida’s Turnpike, and Florida East Coast Railway. Below is the address.
1 East 11th Street Ste. 600 Riviera Beach, Fl 33404 United States 561-383-4100

We offer affordable container moving services in Florida. Our transport rates are all-inclusive without any hidden fees. Our Florida container transport costs vary from one shipment to the other. This is because they’re influenced by factors such as loading and unloading assistance, ground distance, weight and description, season/time among others. Our loading and unloading services are offered at an added fee. Heavy Equipment Transport guarantees timely and affordable container moving services in Florida. For container transport services to and from all the port terminals and cities in Florida, contact us today via our toll-free number (888) 730-2951.