Transporting Containers To and From Georgia

We have a team of dedicated specialists who are always available to process container transport requests. For each shipment, we allocate a specific agent whom clients can call at any time of the day. Our specialists ensure each shipping container is fully insured before transport and accompanied by the right papers before its dispatched. They also recommend the most suitable trailers to make our container transport services fast and efficient. We transport all types and sizes of shipping containers in all the cities in Georgia. Our container moving services in Georgia are fully insured and each client made holders of our insurance cover. This makes the compensation process easy when needed because clients can directly go to the insurance company.

Janelle Foltz, one of our container transport specialists, was in charge of transporting this 7L 7W 9H and 4500lbs storage container from Savannah, GA to Kailua Kona, HI. She decided a hotshot trailer was suitable since it would accomodate its weight and size evenly. To transport a storage container, call us today!

SHIPPING A STORAGE CONTAINER ON A HOTSHOT TRAILER 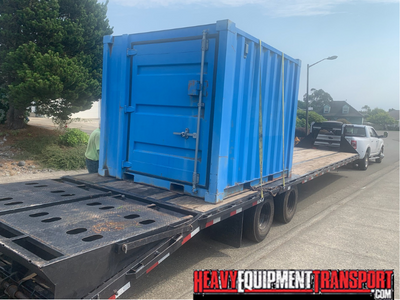 Everything You Need to Know About Georgia and Container Transport

Georgia was founded in 1732 initially as the Province of Georgia. It was later appointed as the last and southernmost of the thirteen colonies in 1752. More than three decades later, in 1788, it ratified the United States Constitution to become the fourth state. Georgia has had a very influential claim in the country’s politics. It was home to the prominent Martin Luther King Jr. Currently, Georgia, with over 10 million residents, is among the most populous states in the United States. Atlanta, also called world city, alpha city, or world center, has a mega effect on the state’s economy where film, communications, transportation, finance, and tourism are the major economic drivers.

Major tourist attractions include the Centennial Olympic Park, the Atlanta Botanical Garden, CNN Center, the High Museum of Art, and Callaway Gardens. Outdoor activities are also abundant due to the various mountains, water bodies, and hiking trails such as the Bell Mountain, Chattooga River, and Appalachian Trail. Interesting facts about Georgia are that it’s also referred to as the Peach State; it’s the country’s lead producer of pecans, peanuts, and Vidalia, the world's sweetest onions. In addition, Coca-Cola was invented here in 1886.

Heavy Equipment Transport is the best shipping container moving services provider. We transport shipping containers to and from cities and ports in Georgia. Below are the port terminals we serve together with their contacts and addresses.

Operated by the Georgia Port Authority, this port deals with imports such as heavy machinery and exports such as vehicles, heavy cargo, and agricultural products. Below are the terminals and their addresses.
Colonel’s Island Terminal This terminal handles break bulk and project cargo. It has 3 berths and three auto processors. Below is the address and contact. 157 Penniman Cir Brunswick, GA 31523 United States +1 888-645-7304

Managed by the Georgia Port Authority, this port handles containers. Below is the address and contact.
Crandall, GA 30711 United States +1 706-517-8264

Our container moving services are affordable. The cost of transporting a container in Georgia varies from one shipment to the other. This is because it's influenced by factors such as ground distance, loading and unloading assistance, weight and dimensions, season among others. We offer all-inclusive container transport costs. Our quotes are free and accurate. For clients who don’t have cranes, we offer loading and unloading assistance at an added fee. When rigging crews are needed, we also provide them at an extra fee. Heavy Equipment Transport is the partner you need when transporting a container in Georgia. For reliable and timely container moving services in Georgia, contact us today via our toll-free number (888) 730-2951.