What are Tower Cranes and How Do You Ship One?

What are Tower Cranes and How Do You Ship One?

A tower crane is a huge lifting equipment used on skyscraper building sites. They can reach heights of more than 80 meters unsupported. Tower cranes have a lifting capacity of up to 20 tons, allowing them to move almost all building materials at the same time. They are erected next to the building to ensure stability.

Because it is a fixed piece of equipment, the crane’s base doesn’t move. A large, fixed tower supports a horizontal beam, or jib, which stands atop the tower to create an uneven letter “T.” A tower crane is often used in construction projects to install steel beams and other heavy building materials. It can also be used in the shipping and transportation industries to load and unload heavy cargo ships.

The tower crane’s base rests on a concrete pad, the thickness of which varies depending on the crane’s height and weight. Large anchor bolts are used to secure the tower’s base to the concrete, and they may penetrate several feet into the ground. This keeps the tower securely anchored, minimizing the chance of collapse.

The jib rests on top of the vertical tower, which stretches hundreds of feet into the air. The longer section of the jib has cables connected to it to move or position objects below, while the shorter piece extends away from the cables to serve as a counterweight. To improve the crane’s balance, more concrete or steel counterweights can be hung from the shorter part of the jib.

Where the jib meets the tower, it is normally where an operator car is positioned. The tower crane operator controls the jib and the movement of the materials while seated inside this car. The operation of connecting materials to the tower crane’s cables is overseen by someone on the ground or within the building. The person who does this is called a “rigger,” and he or she talks to the crane operator either by radio or by hand signals. 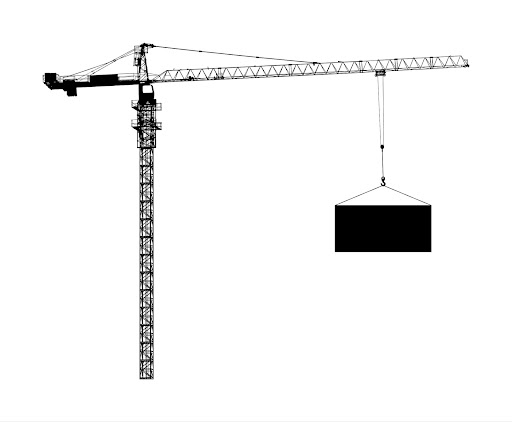 Tower cranes may be divided into two main categories depending on the way that they are erected.

Tower cranes are often leased or hired for the duration of the project. They are renowned for their exorbitant prices as well as the extensive safety measures needed to avoid injury or collapse. The tower crane may be left in place in exceptionally tall or intricate constructions such that it becomes a permanent component of the structure. This makes it possible for contractors to finish their jobs without risking damage by trying to take a crane off a building that is already done.

Tower crane owners often find themselves having to transport their large, heavy equipment from one place to another. Fortunately, it’s rather simple to find a transport company to manage the local or international shipping procedures of a crane. Since more and more manufacturers and dealerships use transport companies to ship their heavy equipment, many shipping companies are now able to help move such large pieces of equipment.

Tower cranes must be delivered in parts by big trucks to the construction site. These parts include the mast, the working arm (jib), the slewing unit, counterweights, and a wide range of other components. A mobile crane team assembles the crane after it has arrived on the job site. This explains why you won’t see big tower cranes driving through the city, but you will see plenty of tower cranes at tall building construction sites.

Even if tower crane weren’t too big to be transported on public roads, tower cranes are stationary and can only be used where they are erected, unlike mobile cranes. A special type of tower crane, referred to as a “jumping crane,” can jump every floor of construction, enabling it to stay on top of the building at all times.

Modern tower cranes are more user-friendly and space-efficient as a result of developments in technology and improvements. They have since become an essential component of our daily lives as the presence of high rises continues to spread over the skylines of cities all over the world. This means that tower cranes will probably be in higher demand for years to come.