Our Nevada clients know that Heavy Equipment Transport is the best company to ship semi trucks, whether local or long distance. We transport new and used semi trucks to Nevada and the surrounding states. Heavy Equipment Transport is licensed, bonded, and insured, plus we have over a decade of experience shipping semi trucks to and from Nevada. We always keep up to date on the latest D.O.T. laws and updated safety standards, so you can be confident in our Nevada semi truck transport services.

A dedicated logistics agent will be with you from the first phone call to final delivery. Our drivers and loading crews know their way around semi trucks from all major manufacturers, including Freightliner, Peterbilt, and Volvo. Heavy Equipment Transport is the best Nevada semi truck transport company. All of our drivers are fully qualified, insured, and ready to transport semi trucks in Nebraska for you. Call for a Nebraska semi truck transport quote! (888) 730-2951

Heavy Equipment Transport is the Industry Leading Nevada Semi Truck Transport Company. We ship new and used semi trucks across the country with ease. We also have a dedicated international team that can transport your semi truck from Nevada to anywhere in the world. We handle all permits, paperwork, and customs paperwork so you can focus on what’s important. Heavy Equipment Transport is here to provide a quality Nevada semi truck shipping solution. We ship semi trucks to Nevada and the surrounding states. We’re here to provide you with the best quality service available.

As semi truck transport professionals in Nevada, our drivers use several interstates to transport semi trucks, including:

I-15 begins in Primm, Clark County, continues through Las Vegas, and crosses the Arizona border in Mesquite. The highway only passes through one county in Nevada and is more commonly known as the Las Vegas Freeway. From Primm, the road travels north through the desert to Las Vegas urban area. At the Southern Beltway Interchange, the road provides access to McCarran International Airport and Henderson before traveling on the west side of the famous Las Vegas Strip towards downtown. The highway heads into North Las Vegas before leaving the urban area. From here, the road heads northeast, crossing the Muddy River, and climbing Mormon Mesa before entering Mesquite.

I-80 is a route that passes through northern Nevada. It servers the Reno-Sparks metro area and passes through several towns, including Fernley, Lovelock, Battle Mountain, Elko, Wells, and West Wendover. The road follows the historical Victory Highway, SR 1, and U.S. Route 40 along its journey through Nevada.

I-80 enters Nevada in the Truckee River Canyon, serving the metro areas of Verdi, Reno, and Sparks, also known as Truckee Meadows. Once leaving this area, the highway resumes its route alongside the Truckee River, moving away once it reaches Wadsworth. Past Wadsworth, the road cuts across the barren desert of the Lahontan Valley. For almost 400 km, I-80 then follows the Humboldt River route before joining the Feather River railroad route until it meets the Utah state line. 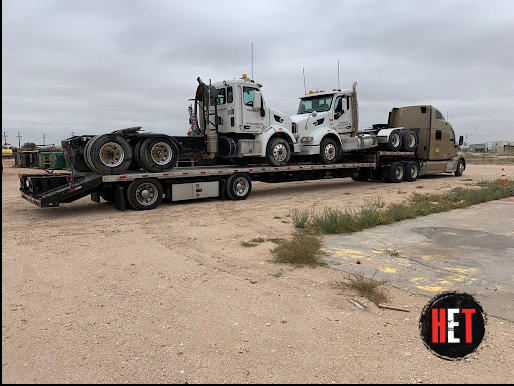 Brian was in charge of transporting two semi trucks from Las Vegas, NV to Kansas City, KS. From years of experience in shipping semi trucks across the country, this wasn’t a problem to Brian. He started by acquiring paperwork for each of the semi trucks. He then fully insured them separately and made the owner a holder of the insurance cover. This is important to ensure that in case the semi trucks weren’t delivered in the condition they were picked in, the owner would claim full compensation from the insurance company. Based on the total weight and dimensions of the semi trucks, Brian decided a step deck trailer was the most suitable for transport.

The two semi trucks would fit perfectly and their weight would be evenly distributed. Brian contacted one of our professional drivers in Las Vegas, NV and briefed him on where and when he would pick up the semi trucks. On the day of transport, our driver and rigger men arrived early and worked together to load the two semi trucks successfully. They then proceeded to secure each of them tightly for transport because too much movement makes the straps loose. Once the driver was dispatched, he decided to use route I-70 E because it was the fastest and most convenient. On the third day, the driver managed to deliver the two trucks safely and before the deadline.

We successfully helped a client transport two semi trucks from Nevada to Kansas safely and on time. 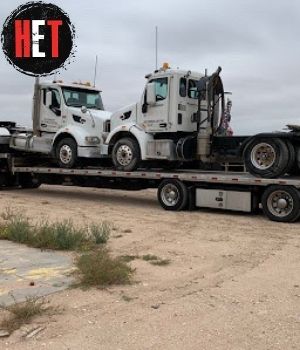 Semi Truck Transport Below are the pick up and delivery locations of the two semi trucks.