Transporting Semi Trucks to and from Nebraska

Heavy Equipment Transport is go-to semi truck company in Nebraska. Locals know when they need to ship a new or used semi truck from Nebraska, that Heavy Equipment Transport is the company to get it done right. For over a decade we have built a reputation as a reliable semi truck shipping company that our clients rely on. Shipping semi trucks to or from Nebraska is done with top-quality service at the most affordable rates. We preplan the route for efficient transport and on time delivery.

A dedicated logistics agent will handle all the paperwork for your Nebrasks semi truck transport. As mentioned above, this includes preplanning the route, along with obtaining the proper permits to ship your semi truck. Whether you’re shipping a new semi truck to Nebraska, or need to transport a used semi truck from Nebraska to another state, Heavy Equipment Transport will get it done safely and with the quality service, you deserve. With our semi truck transport team on your side, you're guaranteed to experience the joys of efficient Nebraska semi truck transport that's convenient and reliable. Let’s get started! (888) 730-2951

How Much Does it Cost to Ship a Semi Truck to Nebraska?

Nebraska semi truck shipping services vary in cost. Several factors attribute to this. For instance, transporting a semi truck from across the country to Nebraska will cost more than shipping a semi truck from a close neighboring state. If your semi truck is inoperable and needs load assistance, an extra fee is incurred because of that. Another aspect of transport that may add to cost, is the route--if the route is full of toll roads, this may increase the quote price. This is why Heavy Equipment Transport preplans the route, searching for the lowest rates available.

As semi truck shippers in Nebraska, our crews will often utilize some of the state's busiest roads, including:

I-80 runs east to west from the Wyoming state border to Omaha. This is the only interstate that crosses from one edge of the state to another, and there is no north-south highway. There are 80 exits along the I-80's route in Nebraska, and the highway serves as a primary transport route. Most of the route travels through plains, and the road between Lincoln and Grand Island has very few curves. Traveling from one end to the other along the I-80 in Nevada, you'll come across more than 80 interchanges, cross more than 440 bridges, and pass 25 rest areas, each spaced approximately 56-80 km apart.

Another busy route in Nebraska is U.S. Highway 6. It connects the Colorado border to the west of Imperial to the Iowa border past Omaha in the east. Entering the state from Colorado, the route travels southeasterly before turning east until reaching Imperial. From Imperial, the road continues to the Enders Reservoir State Recreation Area before continuing southeasterly until just west of Culbertson.

Route 6 and Route 34 continue east to McCook, where the routes turn northeast to Cambridge then east to Arapahoe. The route follows an easterly direction until nearing Holdrege, where it turns to the northeast to pass through Minden and Heartwell. Past Heartwell, Route 6 heads due east through Hastings, then on to Sutton and Fairmont before crossing the state border. 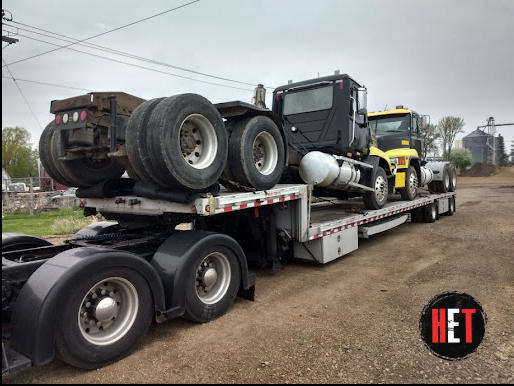 We shipped a 1989 Peterbilt 389 Day Cab semi truck from Nebraska to Idaho safely and on time.

Brian, one of our most experienced semi truck transport specialists was taken to transport a 1989 Peterbilt Day Cab semi truck from Lyons, NE to Aberdeen, ID. The client had paid for our expedited services because he was in urgent need of his semi truck to be delivered. Without wasting any time, Brian worked on all the necessary paperwork and fully insured the semi truck. After looking at the dimensions and weight of the semi truck, he decided a double drop deck trailer would be the most suitable for transport. It would be easy to load the 1989 Peterbilt 389 Day Cab semi truck and its capacity would accommodate it perfectly.

Brian proceeded to arrange with the driver where and when he would pick up the semi truck. Heavy Equipment only uses professional drivers to transport semi trucks across the country. On the day of transport, our driver was at the pick up location early where he carefully loaded the semi truck onto the trailer after inspecting it and filling out a BOL form. After securing it well for transport, he was dispatched and decided to use route I-80 W and later connected to US-30 W. He arrived at the delivery location before the deadline and the client was happy and satisfied with our services.

We offer timely and affordable semi truck shipping services to and from Nebraska. 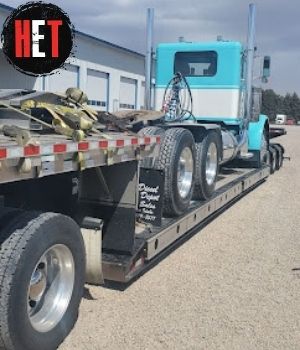 1989 Peterbilt 389 Day Cab Semi Truck Transport Below are the pick up and drop off locations of the semi truck.