When it comes to semi truck transport in Michigan, there's no one better qualified to handle your semi truck shipping than the Heavy Equipment Transport team. Every driver, semi truck, and trailer is meticulously vetted before being chosen for your semi truck shipping request. We transport Semi Trucks to all cities within Michigan, Including Detroit, Grand Rapids, Warren, Sterling Heights, and Lansing. We make sure that all equipment is inspected before departure, all equipment is secured safely, and every semi truck arrives on-time, without compromising the high quality of our semi trucking services.

At Heavy Equipment Transport, we offer load tracking to every customer. Our GPS load tracking service enables you to follow your semi truck's progress at all times. Not only do we do this to help you plan effectively for its safe arrival, but it provides you with peace of mind as you'll always know where your semi truck is along its route. It's just one of the many ways that we ensure that secure semi truck shipping occurs throughout Michigan. We also ensure that every driver we employ to undertake your semi truck transport project is fully qualified, insured, and an experienced semi truck handler. Let’s get started! (888) 730-2951

I-75's route through Michigan enters from Ohio in the south, just north of Toledo, and follows a generally northward run through Detroit, Pontiac, and Bay City, ending at the Canadian border in Sault Ste. Marie. The highway serves both of Michigan's major peninsulas and travels through every landscape from typical southern Michigan farmland to northern forests, suburban communities, and Detroit's urban core.

I-75 also crosses three monumental bridges across significant bodies of water. This route is the busiest in the state, particularly between the Davison Highway and McNichols Road in Detroit, where approximately 194,300 vehicles use the road daily. The highway itself varies in size between four and ten lanes wide, with the broadest stretch between Kawkawlin and the Ohio border.

I-96 is a commonly used east-west interstate throughout the Lower Peninsula of Michigan. It begins at a cloverleaf exchange just north of the county airport in Norton Shores, near Muskegon city. It first crosses Crockery Creek before turning east toward Coopersville. Close to Ironwood Drive, the road turns southeasterly as it goes through Marne and into Kent County. While in Kent County, the route turns east once more through Walker before entering the Grand Rapids metro.

After leaving Grand Rapids, the route curves around the south of Pratt Lake before crossing into Ionia County. On the I-96, you'll pass south of Ionia and near Portland before crossing the Grand River and traveling southeasterly into Clinton County and Eagle. Finally, the road reaches the western edge of the Lansing metro area and merges with the I-69, crossing into Ingham County and following the southern edge of the city's metro area.

We transported a 2016 International single axle tank semi truck from Lansing, MI to Chicago, IL safely and on time.

Brian, one of our experienced agents, helped a client transport a semi truck from Lansing, MI to Chicago, IL. He started by applying for shipping permits so that he could transport the 2016 International single axle tank semi truck through public highways. He then processed the paperwork needed and fully insured the 2016 International single axle tank semi truck for transport. After evaluating its weight and dimensions, he decided a step deck trailer was the most suitable for transport.

With everything ready, Brian contacted one of our drivers near the pick up location and briefed him on all the necessary details. On the pick up day, he carefully loaded the 2016 International single axle tank semi truck on the trailer and tightly secured it. Brian finally dispatched the shipment and our driver set off. All our drivers are familiar with the fastest and most suitable routes to transport semi trucks from Michigan to different states. He got to the drop off location before the deadline and safely.

We offer safe, timely, reliable and affordable semi truck transport to and from Michigan. 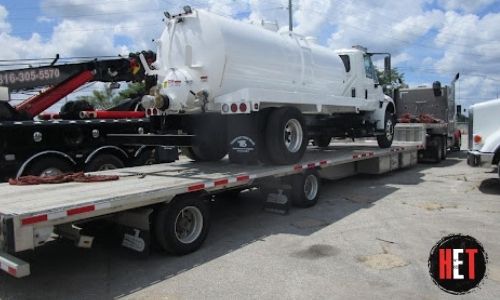 2016 International Single Axle Tank Semi Truck Haul Below are the pick up and drop off locations of the semi truck.