At Heavy Equipment Transport, our Maryland semi truck transport services are provided by professional agents. From the team handling the route planning and scheduling, to the road crew responsible for safely managing the driving, loading, and offloading of your semi truck, everyone is dedicated to providing the best Maryland semi truck shipping experience. Every driver is licensed, fully insured, and an experienced transporter of semi trucks, as well as confident traveling on Maryland's busiest roads.

Heavy Equipment Transport is the industry-leading Maryland semi truck transport company. We provide a vast range of Maryland semi truck transport solutions, including drive away shipping services. We only work with the best and most experienced drivers for Maryland drive away services. We take pride in offering hassle-free transports that securely ship semi trucks to all locations in Maryland. Whether it's towing from Baltimore to Columbia, traveling through rural Maryland, or involves a state border crossing, or offering Maryland drive away services, we'll get your semi truck where it needs to be.

When you choose Heavy Equipment Transport to ship semi trucks in Maryland, you're choosing a company that can handle the entire semi truck shipping process. We're no stranger to the congested routes you may need to travel, including the I-495's outer loop, I-95, and more local roads, and we're confident that we can transport a semi truck in the most efficient, safest way possible. Get a Maryland semi truck transport rate today! (888) 730-2951

Major Semi Truck Transport and Drive Away Routes in Maryland

Highways in Maryland are often used to tow semi trucks throughout the state. Some of our most commonly traveled routes include:

I-95 runs for approx. 175 km through the northeast to southwest Maryland. From the border with Delaware, it travels through the state until its exit over the Woodrow Wilson Bridge. It's one of the busiest highways, first running concurrently with the Capital Beltway and crossing the southern point of the District of Columbia before touching down in Prince George's County.

I-95 turns north past the MD 4 interchange and runs through Greenbelt Park and College Park before continuing northeast through Beltsville and Howard County. I-95 enters the Fort McHenry tunnel, curves under the Northwest Harbor, and emerges in Canton, Baltimore. From here, you can travel through east Baltimore and on to northeastern Baltimore County before exiting MD.

One of the busiest auxiliary interstates in Maryland is the I-270, a 55 km highway that connects the Capital Beltway to the I-70 in Frederick. Known locally as the Washington National Pike, it makes up the easternmost part of the Dwight D. Eisenhower Highway. The route mostly travels through the suburbs, particularly in the southern part of Montgomery County, which connects Rockville, Gaithersburg, Germantown, and Clarksburg.

We shipped a 1988 International 7400 semi truck from Baltimore, Maryland and delivered it in Lexington, KY safely.

Hal Foster was assigned to help a client transport a semi truck from Baltimore, MD to Lexington KY. Having done this for years, he knew the first step was to apply for shipping permits. While he waited, he acquired the much needed paperwork and fully insured the 1988 International 7400 dump truck. After looking at the weight and dimensions of the semi truck, he decided that an RGN trailer was most suitable for transport.

Once he received the shipping permits, he contacted one of our professional drivers in Baltimore, MD and told him where he was to pick up and drop off the semi truck. On the date given by the client, our driver loaded the 1988 International 7400 dump; truck and secured it for transport. When he was dispatched, he knew the best route to use to transport the semi truck fast. After hours of being on the road, he got to the drop-off location where he safely delivered the semi truck.

We offer affordable, reliable and timely semi truck transport to and from Maryland. 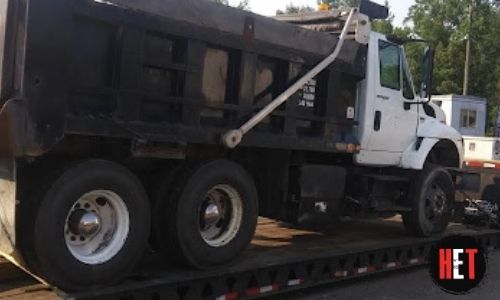