Kansas Semi Truck Transport You Can Rely On

At Heavy Equipment Transport, we pride ourselves on a hassle-free Kansas semi truck shipping services. Even at short notice, you can rely on our friendly, professional team to coordinate the entire Kansas semi truck shipping journey for you. Whether it's a short-distance transport across Wichita or a long-distance drive across the Kansas plains via I-70 interstate, our team can get your semi truck to its next destination. While we are proud to serve Kansas, we are also a nationwide semi truck transport company that can handle out-of-state shipping. We transport new and used semi trucks all across Kansas with top quality service.

Heavy Equipment Transport is the best Kansas semi truck transport company. We meticulously plan each detail of your semi truck shipment, ensuring that everything is done safely and to the highest quality standards. The route is pre-planned, and all paperwork is obtained before transport, allowing for transparent rates. Heavy Equipment Transport ships new and used semi trucks to Kansas and the surrounding states. We even have a dedicated international team that can ship your semi truck from Kansas and deliver it overseas.

With over a decade of experience Heavy Equipment Transport has the expertise needed to ensure dependable Kansas semi truck transport every time our drivers get behind the wheel. Our drivers are comfortable driving in all weather and road conditions. They're also fully insured and licensed to carry out all types of semi equipment trucking services, including driveaway and transporting semi trucks in Kansas. Whether it's a Freightliner, Kenworth, Peterbilt, or Volvo truck, we know how to ship it securely through our dedicated semi trucking network. We transport Semi Trucks to all cities within KANSAS, Including Wichita, Overland Park, Kansas City, Olathe, Topeka, Lawrence, Shawnee, Lenexa, Manhattan, Salina, Hutchinson, Leavenworth, Leawood, Garden City, and Dodge City. Call now! (888) 730-2951

Heavy Equipment Transport utilizes some of the busiest interstate routes for semi truck shipping in Kansas, including the following:

The 1-35 in Kansas travels from the border of Oklahoma to the Missouri border for a length of almost 380km. The highway passes through the state's largest city, Wichita, connecting it to Emporia, Ottawa, Kansas City, and Johnson County suburbs. Near its entrance to the state from the Oklahoma border, it passes through a toll plaza near the exit for South Haven. From here, the route passes Wellington, and the road continues north to Wichita.

After its journey around downtown Wichita, the road passes through the suburbs. Between here and El Dorado, the route intersects US-77 and many other highways before entering the Flint Hills region. Leaving Emporia, the interstate road meets the I-335 and passes through another toll plaza before continuing eastward through east-central Kansas. From Ottawa, the journey turns northeasterly until it meets the Kansas City metro and crosses the state line in Missouri.

The I-70 is another highway that travels extensively through Kansas. It starts at the Colorado border near Kanorado and exits at the Missouri border in Kansas City. The route passes through several principal cities, including Salina, Topeka, Lawrence, Junction City, Abilene, and Kansas City. Once it reaches Colby on its way from the Colorado border, the I-70 turns southeast towards Oakley. The course is generally flat until it reaches the Smoky Hills on the border between Russell and Ellsworth counties. Once it reaches Salina, the highway traverses the Flint Hills and enters Missouri through a main northern route.

We transported a 1988 International dump truck from Wichita, KS and delivered it to Castaic, CA safely and on time.

Sam, our top agent, helped a client transport a 1988 International dump truck from Wichita, KS to Castaic, CA. He worked on the much needed paperwork and fully insured the semi truck. To transport the semi truck from Wichita, Kansas to Castaic, CA, he needed shipping permits. After looking at the specs of the 1988 International dump truck, Sam decided that an RGN trailer would be the most suitable for transport.

When he finally received the shipping permits, he contacted one of our professional drivers in Wichita, Kansas and briefed him on the date and where he was to pick up the 1988 International dump truck. On the date given by the client, our driver went to the pick up location where he loaded the semi truck and secured it for transport. Once Sam dispatched the shipment, our driver used the shortest route to ship the semi truck from Wichita, Kansas to Castaic CA. He made it to the drop off location before the deadline.

HeavyEquipmentTransport.com offers timely and affordable semi truck transport services to and from Kansas. 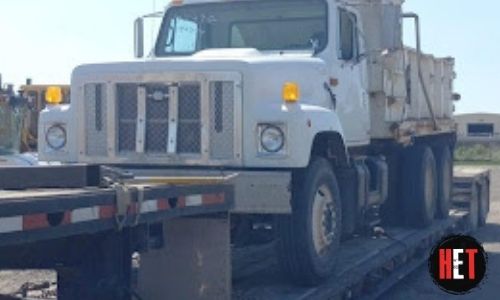 1988 International Dump Truck Transport Here are the specs, pick up and drop off location of the semi truck.