We've been towing semi trucks throughout Indiana for more than a decade. At Heavy Equipment Transport, we're always ready to handle any semi truck shipping requests that involve transporting a semi truck through Indiana. Whether you're just passing through or Indiana is your semi truck's last stop, our trained professionals can assist you. Our logistics professionals can plan the route, apply for permits, complete all necessary paperwork, create a schedule that meets your needs – and more! When it comes to shipping a semi truck, there's no one better prepared than our semi truck towing company. Call now! (888) 730-2951

We're more than just a standard semi truck hauling company. We offer fully customizable semi truck transport services, designed to provide you with a quick, hassle-free alternative to driving a semi truck to its next stop. We understand that safety, efficiency, and transparency are essential to people who need to ship a semi truck in Indiana, and that's what makes us the premier semi truck transport company. We'll help you to keep track of your semi truck at all times through our load tracking service, and we only employ insured, licensed, and skilled professionals to handle your trucking request in Indiana. We transport Semi Trucks to all cities within Indiana, Including Indianapolis, Fort Wayne, Evansville, South Bend, and Carmel. Let’s transport your semi truck today! (888) 730-2951

As semi truck moving professionals in Indiana, our drivers will use several busy interstates to deliver semi trucks, including:

I-64 is a significant east-west route that provides access to Illinois and Kentucky throughout Indiana. The road's course is mostly rural, but it connects all four of the counties in the Evansville metro area, as well as provides access to the Louisville metro area. The highway first enters the state crossing the Wabash River, and heads through Posey before crossing the Gibson-Vanderburgh county line. It also leads through Warrick County, Spencer-Dubois, and Perry County, often switching between the central and eastern time zones before finally crossing into Crawford County and remaining in the eastern time zone for the rest of its journey. The latter portion of the route also travels through the Hoosier National Forest, taking many sharp turns and crossing many steep hills before crossing the Ohio River into Kentucky.

Another important east-west highway is the I-70. It crosses the south side of Terre Haute, passes through the capital of Indianapolis, and connects drivers with the Indianapolis International Airport. Once past the airport, the road curves northeast then east before crossing the White River and passing south of downtown Indianapolis. Exiting downtown Indianapolis towards the northeast, the I-70 continues to Richmond. To the northwest of Richmond, the route is joined by the U.S. 35, and both cross over into Ohio.

Transporting a 2019 Peterbilt 375 Semi Truck from Columbus, IN to Denton, TX

HeavyEquipmentTransport.com transported a 2019 Peterbilt 375 semi truck from Indiana and delivered it in Denton, Texas safely and on time.

On the date agreed upon for transport, he contacted one of our professional drivers near the pickup location who loaded the semi truck trailer and secured it for transport. After confirming everything was done accordingly, Milos dispatched the shipment. After an hour of being on the road, our driver managed to deliver the 2019 Peterbilt 375 semi truck safely and before the deadline.

We offer professional semi truck shipping services to and from Indiana. 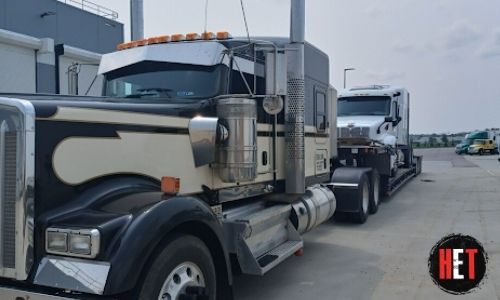